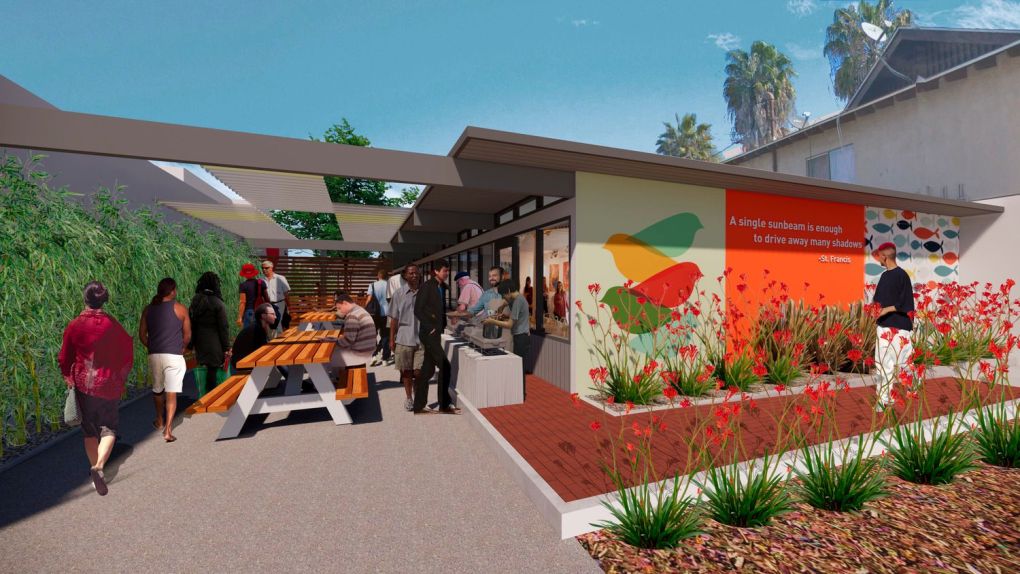 An artist’s rendering depicts a long driveway as a new courtyard and garden for people. (Rendering courtesy Studio One Eleven)

After being closed for years due to code violations, a service center providing food, clothing and emergency assistance for people in need in Long Beach is set to reopen in 2021.

The St. Francis Center, at 1041 E. Seventh St., is undergoing $1.5 million in renovations to add a new commercial kitchen, offices for employment and family consulting services, meeting spaces and storage to provide clothing to people who are homeless. It also transforms a former driveway into a new courtyard and garden.

Construction began in May, more than a year after the design firm Studio One Eleven became involved with the project. The center is set to reopen in November.

The site, built in 1957 by famed architect Edward Killingsworth as a medical building, also contains Modernist architectural details that Studio One Eleven senior principal Michael Bohn said the firm is intent on preserving.

While ensuring the building’s character remains, though, Bohn said there are some changes that will help better fulfill the center’s mission, like repurposing a driveway into an outdoor patio and dining space.

The redesigned St. Francis Center in Long Beach is set to reopen in mid-October. (Courtesy Studio One Eleven)

“We designed this more for people than for the convenience for cars,” Bohn said.

The patio space also creates an area where people seeking services can line up that’s on the property instead of on the nearby sidewalk. And though the design was finalized before the coronavirus pandemic hit, the outdoor space will also make social distancing more feasible.

“At first, we were just going to serve food from the sidewalk, but we don’t want a line of people standing outside in a semi-residential, commercial neighborhood,” Bohn said. “I think this is a much better solution.”

Bohn said the idea for on-site queuing came as his firm worked with neighborhood groups to address potential concerns.

“Of course, in any neighborhood that is serving food to the homeless, there are folks that don’t want them to come back” once the site reopens, he said. “But the groups we talked to were incredibly honest and shared their concerns, and we were able to alleviate those through architecture.”

To further allay neighbors’ worries, Bohn said there will also be a security guard on-site, and St. Francis will pick up any wayward food wrappers or other litter that may result from their services.

“There were a lot of compromises made that will put the neighborhood at ease,” he said.

Ultimately, Bohn said he thinks the new and improved service center will be an all-around benefit to the area.

On the one hand, he said, “we’re going to have a beautiful architectural gem by Ed Killingsworth rehabilitated and brought back to its former glory.”

At the same time, he added, “there definitely is a need in this neighborhood.

“There are people that are hungry everyday, and I think having this facility in the neighborhood where the constituents are is very important and will fulfill an important need.”

One thought on “St. Francis Center to Reopen with New Look in 2021”